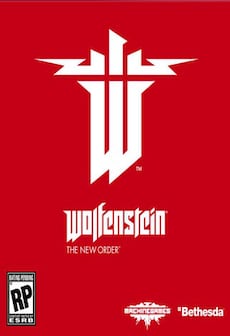 Talking about Wolfenstein is never an easy task. After all, Wolfenstein 3D was a milestone in the computer gaming industry. According to many, the first FPS ever created (which is actually, a wrong statement. Wolfenstein 3D popularized the FPS genre but it wasn't the first). Wolfenstein: The New Order on Steam is a resurrection of the series. You are going to get everything you would expect from Wolfenstein. A fast-paced action, interesting plot and Nazis to kill. Yeah, what else do we need? Maybe a glass of whiskey.

The studio behind the game, the MachineGames, consists of members of the Starbreeze studios. People who created such games like the Chronicles of Riddick and The Darkness. Thus, there is no surprise that the plot in this game is a very important aspect. You are B.J Blazkowicz, the American hero. Unfortunately, in your universe, the Third Reich had won the Second World War thanks to their Wunderwaffe (a super weapon). The game takes place in the 1960s when the Third Reich gained control over the entire World. You have to stop them, before it's too late.

An action-packed model of shooting

The most important elements of the FPS gameplay are obviously shooting and all the action during gunfights with enemies. Wolfenstein: The New Order offers you a lot in this aspect. You have a huge arsenal of knives, rifles, grenades, sniper rifles, shotguns and pistols. You can modify these weapons with silencers or laser sights. However, the beauty of the gameplay is the fact that you can shoot two weapons at the same time. You can also hide behind the cover or use a power slide, thanks to which Blazkowicz is able to move quickly to other cover without the risk of being shot to death.

Below are the minimum and recommended system specifications for Wolfenstein: The New Order Steam Key GLOBAL.

Due to potential programming changes, the minimum system requirements for Wolfenstein: The New Order Steam Key GLOBAL may change over time.