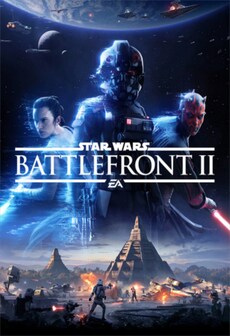 If you dream about a military career among the stars and love George Lucas' universe, then Star Wars Battlefront II is the game for you. Earth-shaking battles, compelling story, stunning visuals, it's a true Star Wars experience for both the Light and Dark Side of the Force!

Meet Iden Ersio, the commander of an elite TIE Fighter squadron called the Inferno Squad, merging aerial superiority with commando tactics on the ground. The story begins when she sees the second Death Star explode, and things progress rapidly from there. Join her on a thirty-year journey across the galaxy far away, and see if she manages to complete the Emperor's final order.Characters you know and love make their guest appearances, letting you play as Kylo Ren or Luke Skywalker in missions tailored to these characters.It's an excellent singleplayer experience bridging the gap between Episodes VI and VII.

SW: Battlefront II brings class-based gameplay to the multiplayer to diversify your experience. Pick an Assault Trooper to push the frontlines with a rifle and devastating shotgun to thin out the enemy ranks. Roll Heavy trooper to lay down suppression fire with a minigun and push through thanks to powerful shields. If you enjoy long-distance support and harrying your foe pick the Specialist for sniper rifles and handy traps. If you choose Officer you'll provide your team with extremely useful abilities boosting their resolve and survivability on the field of battle.

Visit a large number of the planets you know and remember from the Star Wars movies. Explore Theed, Crait, and many other locations drawn from the long history of the galaxy far away. Join armies from several periods: Clones, Droids, Rebels, First Order and others are recruiting and in need of your gun arm and keen eye.

The token system from the first game was reworked from the ground up. Gather points during matches by scoring points for your team in various ways, and unlock access to more powerful units with them. Heavily armored battledroids, Imperial walkers, and powerful heroes are ripe for the taking.Star Wars Battlefront II allows you to experience duels previously unseen in the movies. Test Darth Maul's speed and ruthlessness against Rey's charge and mind control. Teach Kylo Ren the true command of the Force as Master Yoda, or help Captain Phasma catch the traitorous Finn. There are even more heroes for you to discover and work your way towards.

Star Wars Battlefront 2 pushed the limits of visual fidelity in games. The photogrammetry technology reaches new heights in DICE's space shooter, provided you have the machine to run it, of course. Crisp textures, realistic models, detailed facial expressions. It's a visual feast worthy of large screens.

Below are the minimum and recommended system specifications for Star Wars Battlefront 2 (2017) Origin Key GLOBAL.

Due to potential programming changes, the minimum system requirements for Star Wars Battlefront 2 (2017) Origin Key GLOBAL may change over time.